The KromaNyon are the veterans section of Nyon RC

A KromaNyon is a passionate rugby enthusiast. A former 15’s legend, who wants to continue playing his favourite sport in a non-championship environment, following the rules for veterans, a newbie who wants to try rugby, without necessarily playing in competitive championship rugby…or a person who has hung up his boots, but not his rugby soul.

The KromaNyon adheres to the values of rugby and indulges in ancestral rites such as the third half.

The KromaNyon trains once a week. Half of the session is “conventional”: contact, drills, high quality tactics…and the other half consists of flag/touch…but in the KromaNyonnesque style: some collisions may occur, in a good-natured spirit.

The KromaNyon typically plays one friendly match per month against teams that share our values and spirit.

The KromaNyon goes on tour once a year: in recent years, we have seen KromaNyons play in places as varied as Greece, Italy, Ireland and Scotland.

The KromaNyon often meets up with his colleagues off the field: with the Kros, you become a part of a new family!

The  Rules of Vets Rugby 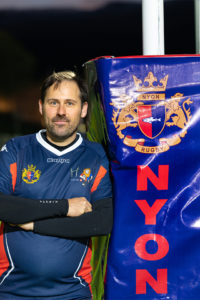 For those who don’t/can’t play.